Andrew Palermo is a director, choreographer and creator of new works for the stage.

Andrew has choreographed multi-million dollar industrials for Toyota, episodes of Comedy Central’s Stella, promos for Tracey Ullman’s State of the Union and commercials for Showtime Network and G-Shock watches.

Along with childhood friend Taye Diggs, Andrew is the Co-Founding Artistic Director of dre.dance, a contemporary dance company.  With performances around New York City and North America, dre.dance has received multiple commissions, residencies, grants and rave reviews for it’s powerful and compelling works.

One such work, beyond.words, which focuses on the autism spectrum, has led Palermo to be a leader in the field of movement therapy. These unique classes, entitled Creatively Able, have been taught around the country, both for children with special needs and their caregivers. Palermo is an in demand collaborator in the fields of medicine and computer technology regarding the integration of the arts and special needs issues.

Andrew is also the Founding Artistic Director of The SpringSpace: A Broadband Theatre Lab. Co-Founded with Executive Director and Broadway Producer Elliot Masie, The SpringSpace provides artistic teams with a focused and fully supported global opportunity to create and hone new work. Located at MASIE Productions LAB in Saratoga Springs, NY, The SpringSpace leverages cutting edge technology that digitally brings together creators from around the world. 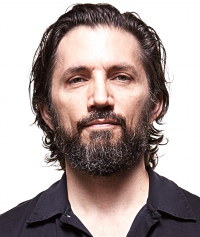