Veenstra serves as the University of California’s (UCI) Claire Trevor School of the Arts’ (CTSA) Drama Department's Vice Chair of Production. He has collaborated as a Production Manager for Counter Balance Theater and for special CTSA events, including Dance Conversations: Theatres in Dance and the Dramatic Transformations productions, which examined the need for cultural inclusivity. Prior to joining UCI’s faculty, he was the Production Manager for the nationally recognized Cornerstone Theater Company based in Los Angeles.  He oversaw the critically acclaimed production of Café Vida, written by Lisa Loomer (Girl Interupted, The Waiting Room) and directed by Michael John Garcés (Los Illegals), in partnership with Homeboy Industries and presented by The Los Angeles Theatre Center operated by the Latino Theater Company.  He also coordinated Creative Seeds: An Exploration of Hunger, a one-of-a-kind 14-day festival comprised of 33 events in 20 different locations throughout Los Angeles with over a thousand attendees.

His experience opened up more opportunities to produce and consult on increasingly complex conferences, symposiums, festivals, and film productions. In 2018, he collaborated with Cirque du Soleil to present the Cirque du Soleil KÀ Symposium at UCI and took a group of over 50 UCI students, alumni, and faculty backstage on several Cirque du Soleil productions in Las Vegas. As the Western Regional Director of the Stage Managers’ Association (SMA), a national organization headquartered in New York City, Veenstra helped recognize western region stage managers for the Del Hughes Awards and provided continuing education and networking opportunities for stage managers in the western region. Events included View from the Wings Symposiums; SMA Go Out Networking events; Speed Networking Events with Regional Theatres; and panels with stage managers including two with the stage management teams from Hamilton: An American Musical by Lin-Manuel Miranda.

In 2017, Veenstra and Theresa Robbins Dudeck launched the Global Improvisation Initiative (GII) Symposium at UCI in conjunction with Chapman University. In 2019, he assisted in presenting the GII Symposium in London in collaboration with Improbable, the world-renowned company of pioneering improvisers, theatre makers, and conversation facilitators. Also in 2017, he brought the Applied Improvisation Network (AIN) World Conference, held at Oxford University in 2016, to UCI and Los Angeles and served as the Conference Chair. He has subsequently mentored the AIN conference teams to host the conference in Paris, New York, and Spain. He also conceived in 2013 and has annually produced UCI's Coup de Comedy Festival, a free 4-day comedy celebration for the community with over 30 performances and workshops. He has also produced a series of documentary shorts exploring the art of improvisational theater, titled Improv Legends: Ideas, Insights, Icons, as well as supporting other film projects.

Improvisation also plays a key component in Veenstra’s teaching, research and creative ventures. Veenstra promotes the interconnection of improvisation, stage management, and production in his work as well as in life itself. He teaches applied improvisation to business executives (both international and domestic) at The Paul Merage School of Business. He is also exploring the application of improvisation within healthcare with UCI's Sue & Bill Gross School of Nursing and UCI’s School of Medicine. He also has developed an Intergenerational Improvisation Workshop curriculum to bridge the gap between the generations that was highlighted by California AARP and Osher Lifelong Learning Institute (OLLI). In addition, Veenstra teaches improvisation for performance (core improvisational concepts; narrative improvisation; long form; improvised film; and improvisation for sketch) and mentors UCI’s two improvisation teams: Live Nude People* (*with clothes on) and Improv Revolution.

From 2000 until 2005, Veenstra performed regularly with River City Improv, a professional improv ensemble based out of Grand Rapids, Michigan.  In the Los Angeles area, he performed with improv ensembles at The Second City Hollywood, iO West, Westside Comedy Theater (formerly Westside Eclectic), and the STAGEStheatre.  He has a created, directed, and mentored multiple improv teams, including Gull Lake Improv, S.W.A.T., and Improv Revolution. He graduated from The Second City Conservatory in Hollywood, Paul Sills’ Theater Game Workshop, and Keith Johnstone’s Improvisational Theatre Intensive.

Upon arriving in Los Angeles in 2005, Veenstra began working as a Story Editor at Alcon Entertainment, which produced films including My Dog Skip, Insomnia, Sisterhood of the Traveling Pants, and The Blind Side, distributed through Warner Bros.  He worked on the release of Richard Donner’s 16 Blocks and Neil LaBute’s The Wicker Man. Veenstra earned production credits for his work on Richard LaGravenese’s P.S. I Love You, which starred Hilary Swank and Gerard Bulter and grossed over $156 million worldwide, One Missed Call, and The Sisterhood of the Traveling Pants 2.

In 1999, Veenstra created Veenstra Enterprises as a producing umbrella company for his creative ventures in film, video, and theatre. At that time, he began directing and teaching theatre for the historic Peddy Players' Summerstock Program in Detroit. In 2000 he delved into television production at Grand Rapids' ABC Affiliate WZZM 13. In 2001, he began a relationship with Compass Film Academy where he produced a number of award winning short films and taught film production and screenwriting. Between the inception of Veentra Enterprises and Veenstra’s relocation to Los Angeles in 2005, he facilitated over 100 film, video, and theatrical productions.

His accolades include the Excellence in Theatre Education Award by the Kennedy Center American College Theater Festival (KCACTF) Festival 50 Region 8, given in recognition of valued service to students as an educator and mentor; the 2018 UCI Chancellor’s Award for Excellence in Fostering Undergraduate Research, given in recognition of outstanding work in mentoring undergraduate students engaged in research and/or creative activity; Student Organization Advisor of the Year in 2015, out of over 600 student organizations; and acceptance into UCI’s Provost Leadership Academy.

He has been a requested educator and speaker at the UCLA Extension, UCI’s Paul Merage School of Business, Calvin College, Compass Film Academy, the Damah Film Festival, Act One: Training for Hollywood, and the AIN World Conferences. His Board of Directors service includes work with the Applied Improvisation Network, the William and Anna VandenBosch Gospel Foundation, and the Stage Managers’ Association. Veenstra earned his MFA in Drama from UCI and his BA in Communication Arts and Sciences, with a Theatre focus, from Calvin College in Grand Rapids, Michigan.

Veenstra is active member in his faith community and a practitioner of mindfulness, improvisation, and Brazilian Jiu Jitsu. He lives in Irvine with his partner, a licensed psychologist, and their two sons. 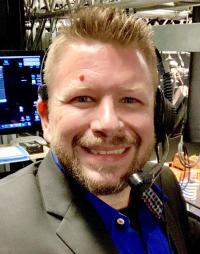