Image: Jalon Matthews, M.F.A. ’20 (center right), in the cast of Pirates of Penzance for the Utah Shakespeare Festival. (Photo by Karl Hugh)

One of Kaden Kearney’s, M.F.A. ’19, last performances before the pandemic was at the Claire Trevor School of the Arts. Now, Kearney is taking curtain calls at the Kennedy Center and the Ahmanson Theatre, as the lead in The Prom musical’s 20-city national tour.

Kearney is one of countless UCI alumni helping to reopen theaters across the country, embraced by audiences who missed live shows for over a year.

“I grew up watching Broadway tours,” says Kearney. “To think of little Kaden watching these shows, and now the fact that I get to do it — on top of being able to work again, and being able to do live theater again — it’s such a gift.”

UCI prepared me to be able to adjust, and adaptability is what’s keeping me going right now.

For Kearney, who uses the pronouns they/them, starring as Emma is especially meaningful because the character’s story about a lesbian high school student’s quest to bring her date to the prom in a conservative Midwestern town resonates personally. They first saw The Prom on Broadway during the annual trip to New York with the CTSA.

“It’s a musical, funny and silly, but also really heartfelt,” says Kearney, who auditioned for the Netflix movie before landing the role in the national tour. “I’ve already gotten so many wonderful messages from young people telling me how much it means to them to see a non-binary person in this role.”

For many in theater, this season marks a joyous return to work after the rug was pulled out from under them in March 2020. The Mrs. Doubtfire musical performed just three times on Broadway before the shutdown. Zachary Dietz, assistant professor of teaching and the play’s musical director, describes returning to the theater “like walking into Pompeii.” Sheet music, gifts and thank you cards from the first preview littered his desk while instruments gathered dust in the pit. When the musical restarted in October 2021, audiences were as ecstatic as the cast and crew.

“Without fail, the show stops for brief moments because the audience is so overwhelmed that they break into applause at places that are not common,” says Dietz, who is also the show’s conductor, and can feel the audience’s energy at his back.

“They go bonkers, screaming and clapping, as they celebrate with us. It speaks to the power of art to serve as a salve as we need this time to heal.” 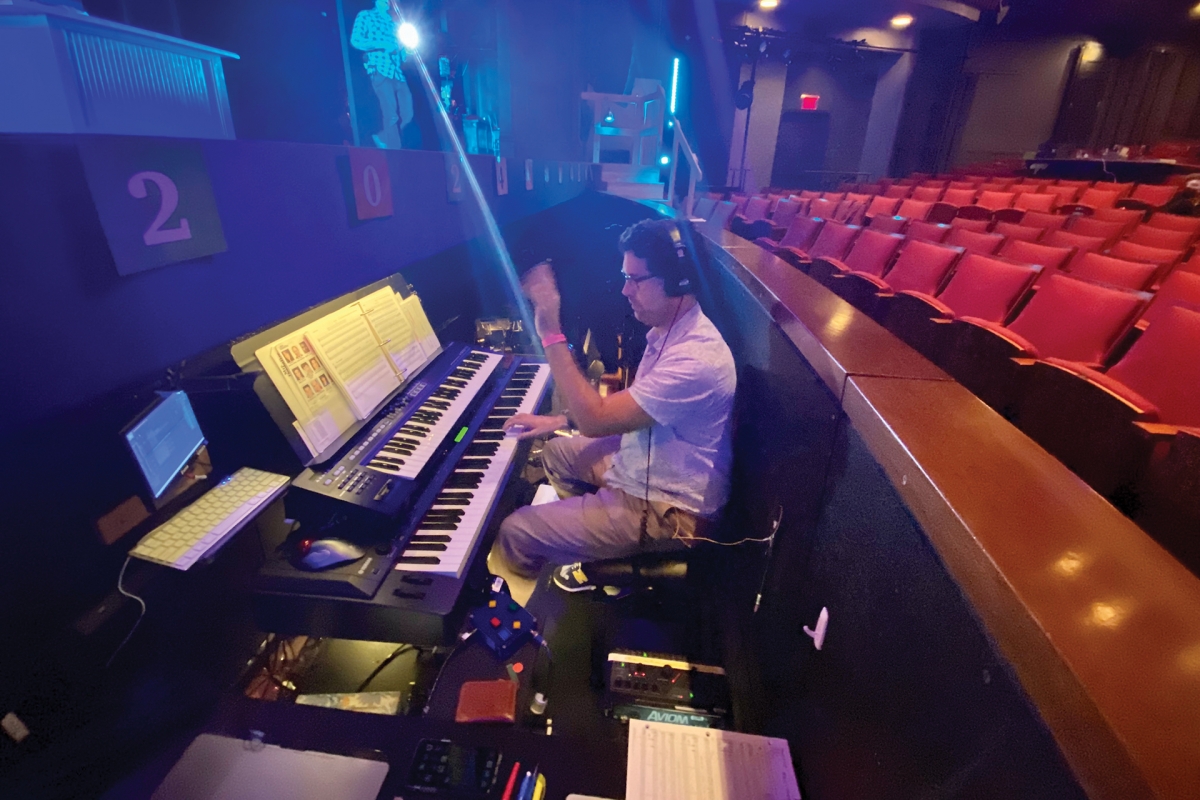 Image: Zachary Dietz, assistant professor of teaching in the Department of Drama, behind the scenes in his role as the musical director of Mrs. Doubtfire on Broadway.

The energy extends off Broadway, where Laura D’Andre ’08 reopened The Play that Goes Wrong after its pandemic hiatus.

“Our show is so uplifting and fun, and that’s something people have been missing,” says D’Andre, who regularly flips through windows as a standby for two physically demanding roles in the comedy. “At the first preview, the audience gave this huge applause that went on and on. It was a feeling of we did it, we made it through! We’re back, and they’re back.”

The excitement isn’t confined to the Big Apple, either. Bryce Colby Vaewsorn ’15 is an ensemble member with the first national tour of Escape to Margaritaville. In many cities, he says, the Jimmy Buffet musical is reopening the local theater venue. 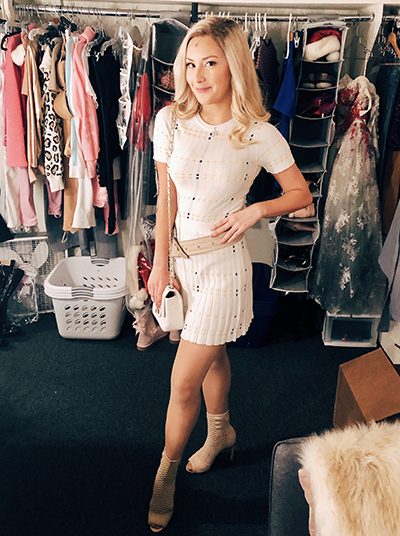 But not every show that closed mid-run experiences the thrill of reopening. Cailen Fu ’18 was the first Asian American to play Mean Girls ringleader Regina George in the Broadway musical.  For more than eight months, she was the standby for two roles, stepping in for the original Broadway cast members as needed. The producers announced in January 2021 that the show would not return to Broadway after the pandemic subsided.

“I’m so grateful for the experience and the connections I made doing Mean Girls, because it helped launch me early on,” says Fu. “I’ve met so many people who have changed the trajectory of my career.”

Fu, who taught online acting courses during the pandemic, recently headlined Escape to Margaritaville at Maine’s Ogunquit Playhouse, and is now back in New York auditioning and focusing on new musical development and TV/film. She says the next musical she acts in might not have been written yet.

This glass-half-full mentality is common among UCI-trained artists.

“We hope, and I really believe this, that our students who work with us here are developing a flexibility and resilience, not just so they can make great art but so they can take care of themselves as artists, as well,” says Phil Thompson, M.F.A. ’89, professor of drama.

Image (left): Cailen Fu ’18, the first Asian American to play the role of Regina George on Broadway in Mean Girls. The show would not return to Broadway after the pandemic subsided.

D’Andre says she cherished spending more time with her new baby and visiting family in California during the shutdown. Dietz, the father of three including a new baby, also appreciated the pandemic’s pause as an opportunity to spend more time with his family. But actors had to get creative during the pandemic, and UCI alumni turned to online teaching, babysitting, voiceover work, and in at least one case, setting up a GoFundMe page to pay rent.

According to Blake Morris, M.F.A. ’16, UCI graduates are prepared to overcome the unexpected. Unable to work his typical day job at a restaurant or airport security in New York, Morris supplemented his income with post-production work. He lent his voice to crowd scenes, a process called looping, which can be done remotely over Zoom.

Fortunately for screen actors, filming continued with minimal interruption throughout 2020 and 2021. At the height of the pandemic, Morris appeared on two episodes of NBC’s Law & Order SVU, and a recurring role in season five of Paramount+’s The Good Fight. He had landed his first TV role in 2018 on FX’s Pose and then went on to a multiple-episode arc on NBC’s Chicago Fire. In many ways, his success in 2020 and 2021 had more to do with him continuing to audition with some of the same casting directors over a period of time.

Gone are the days of hundreds of people crammed into a cattle call audition. 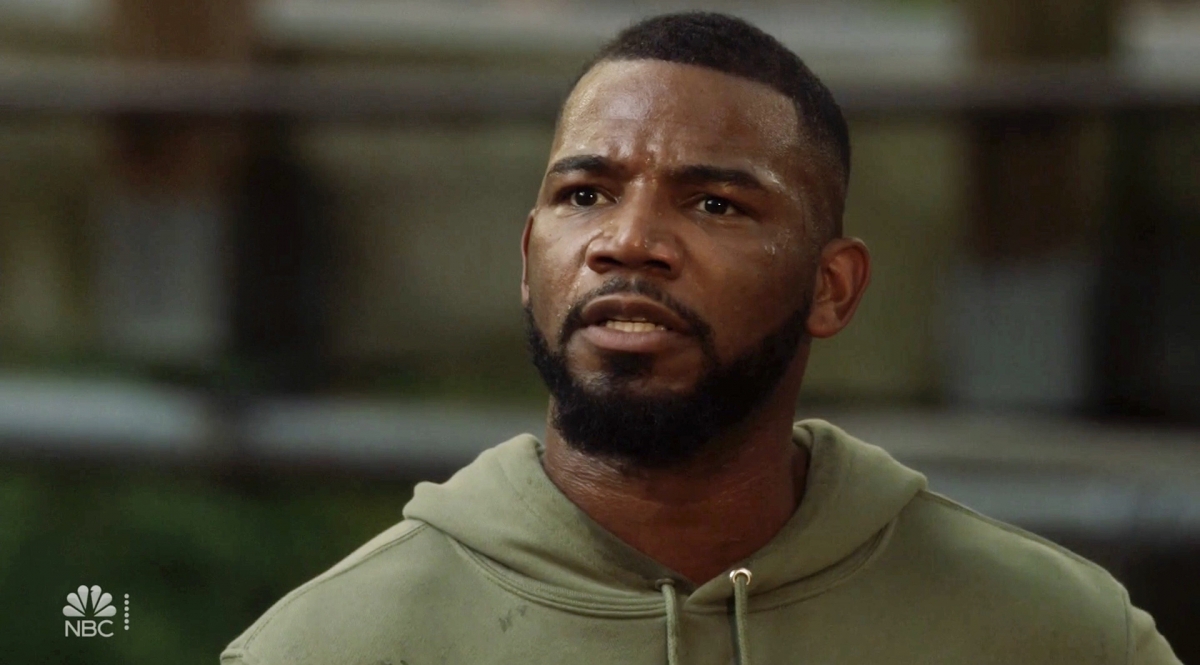 For many actors, the shift to recording your own audition and sending it in, is a mixed bag.

“With self-tapes, you get to take all the time you need, you have control, and you don’t have to go to the city,” Morris says. “But you’re also having to be in charge of cinematography, hair, lighting and timing.”

Like almost every actor adapting to the industry’s changes during the pandemic, Morris set up an in-home studio with lighting, even painting one wall of his apartment blue to serve as a consistent background for videos. But with convenience comes challenges — especially for perfectionists. Actors can easily get sucked into rerecording a scene multiple times in search of the elusive best take. Even though they didn’t prepare for this specifically, many actors find their UCI training useful in times like these.

Image (right): Blake Morris, M.F.A. ’16, on screen in an episode of NBC’s Law & Order SVU that aired during the pandemic. (Photo: Courtesy of Blake Morris / NBCUniversal)

“Before I went to UCI, I didn’t have an acting process,” Morris says. “Now, when it’s just me and the scripts, and no one is there waving a finger at me, I have a process I can lean on.”

Now that anyone with a smartphone can audition from anywhere in the world, the pool of potential competition has widened, too. But actors concede that no casting director can watch every single audition tape they get sent. Connections and relationships still matter.

Jalon Matthews, M.F.A. ’20, was still a student when he auditioned for Utah Shakespeare Festival’s artistic director Brian Vaughn. Nearly two years later, as Vaughn was preparing to help reopen the festival with Pirates of Penzance, he remembered Matthews and asked him to submit an audition tape. To overcome trepidation with audition tapes, Matthews leans on what UCI professor of acting Richard Brestoff teaches as “instant craft.”

“With instant craft, you memorize, internalize and put it back out as quickly as possible,” says Matthews. “It can be so difficult to feel confident because you don’t get instant feedback from tapes, but thanks to my M.F.A. experience, I have the tools to feel confident that this is my best work the first time, and then letting things go and trusting in myself.”

...thanks to my M.F.A. experience, I have the tools to feel confident that this is my best work the first time.

Matthews landed the role of Frederic and performed throughout the play’s run from June to October 2021 and says, “It was a spiritual experience being back on stage.”

Auditions are not the only thing that’s different post-pandemic. Both in theaters and on TV sets, extensive COVID-19 safety protocols are in place. Every production now includes COVID compliance officers dedicated to giving COVID tests and reminding cast and crew to wear their masks offstage.

“We all go home at the end of the day to our own families and communities and circles of exposure,” says Dietz. “COVID compliance teams are one of the many, behind-the-scenes jobs that often go unnoticed. We are so lucky to have their constant oversight and protection of us during this time of transition.”

If “making it” was hard before the pandemic, it’s even harder now. But alumni lean on their training from UCI to help them thrive amid challenges.

“As you get out in the professional world, you learn that everyone’s wickedly talented,” says Fu. “UCI taught me to think about being a human first and then an artist. You can be a triple threat singer, dancer, actor, but if you’re not a human first, it doesn’t matter.”

Fu says acting and musical theater students who come out of UCI tend to know who they are and what they want as an artist.

Kearney, who remembers feeling afraid of coming out as non-binary and cutting off their long hair, agrees. They booked two jobs soon after taking that leap.

“I was standing in the middle of my truth, entering auditions authentically as myself,” Kearney says. “I 100% believe I wouldn’t have gotten this role otherwise. Lean into who you are, that’s your superpower.”

Thompson, who provides speech and vocal coaching to professional actors in addition to teaching at UCI, thinks self-awareness and resilience are among the trademarks of a UCI actor.

“One of the things about UCI students I’ve heard from casting directors, and I think it’s very true, is they come through their training with a great deal of personal presence and fluidity. Even though there’s plenty of unhappiness around recently, our students have come through happy,” Thompson says. “Now, they are ready to rumble.” 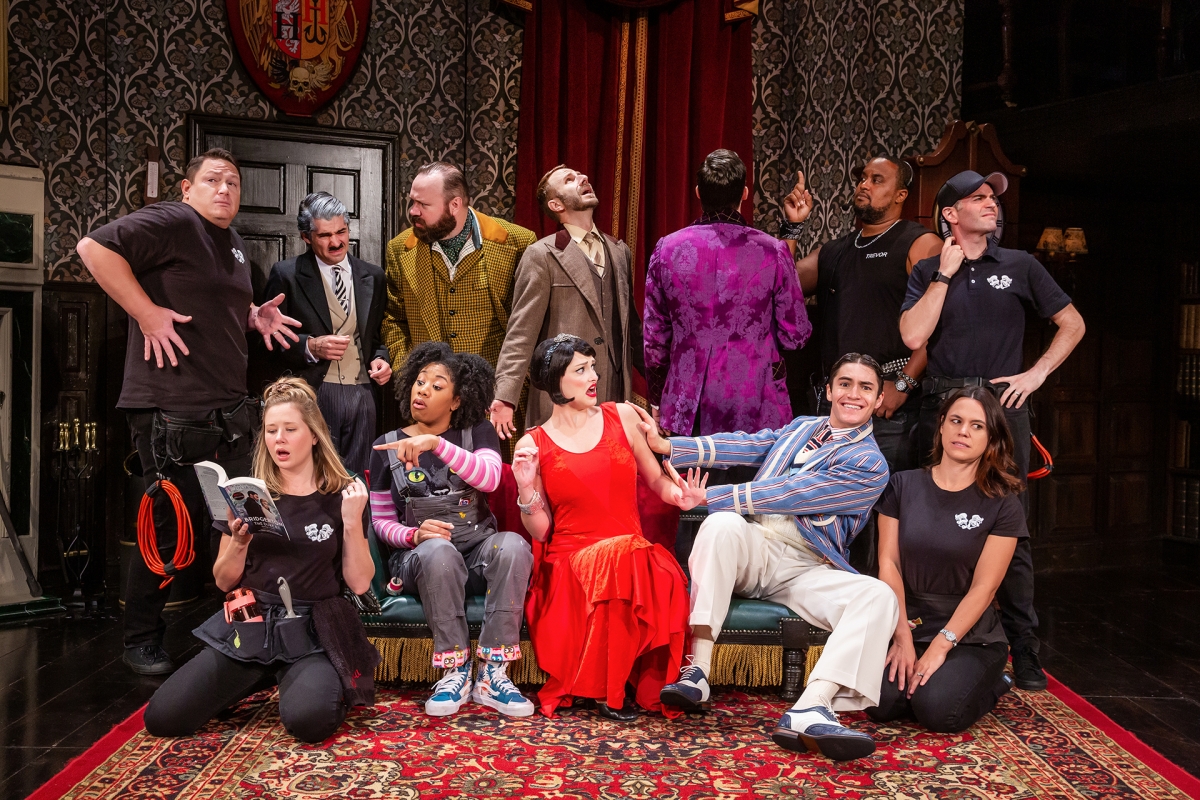 Image: Laura D’Andre ’08 (bottom, far right) in the cast of The Play that Goes Wrong. Photo by Jeremy Daniel.

Learn more about faculty, students and alumni from the Department of Drama at drama.arts.uci.edu.