UC Irvine M.F.A. graduate Donnetta Lavinia Grays (acting, ’02) was already an accomplished actor and playwright when she received news this year that would change her life.

In February, she was informed that she had won a prestigious Whiting Award, a $50,000 annual grant that recognizes 10 emerging writers in fiction, nonfiction, poetry and drama. Recipients have gone on to win other big honors, such as the Pulitzer Prize, the National Book Award and MacArthur and Guggenheim fellowships.

Grays was recognized for her accomplishments and potential in drama, which include the plays Where We Stand, Warriors Don’t Cry, Last Night and the Night Before, Laid to Rest, The Review or How to Eat Your Opposition, The New Normal and The Cowboy is Dying.

“I got a text while I was on my morning walk,” Grays said during a recent Zoom call from her residence in Brooklyn, N.Y. “At first, I thought it was a scam. You know they have those scams, where the first six digits are the same as yours. This was the phone number that came in.”

But Grays responded to this call, and everyone on the Whiting Award selection committee was on the other line.

“I started balling,” she recalled when they shared the good news. “I’d known about the Whiting forever. For it to be this, in this literary company, it was awesome and unexpected.”

Since graduating from UCI, Grays, 43, has not been an unknown quantity. She has appeared on and off Broadway, and on stages throughout the country, including the American Conservatory Theater, Portland Stage Company, Baltimore Center Stage, Oregon Shakespeare Festival and the Los Angeles Women’s Shakespeare Company.

Her film and TV credits include The Book of Henry, The English Teacher, The Wrestler, and recurring roles on New Amsterdam, Happy, Rubicon, Mercy and Law and Order SVU.

She has also written for the TV shows Y: The Last Man on FX, and Joe Exotic, which will appear on NBC.

But perhaps her most significant contributions have been as a playwright. Her plays have been developed and performed at theaters across the country, including Berkeley Rep, New York Theater Workshop, Orlando Shakespeare Theater, Portland Stage Company and Steppenwolf.

Where We Stand has probably garnered the most attention recently. It’s a solo show that engages directly with the audience, and as Entertainment Weekly states, “it uses fable-like storytelling to explore class issues.” 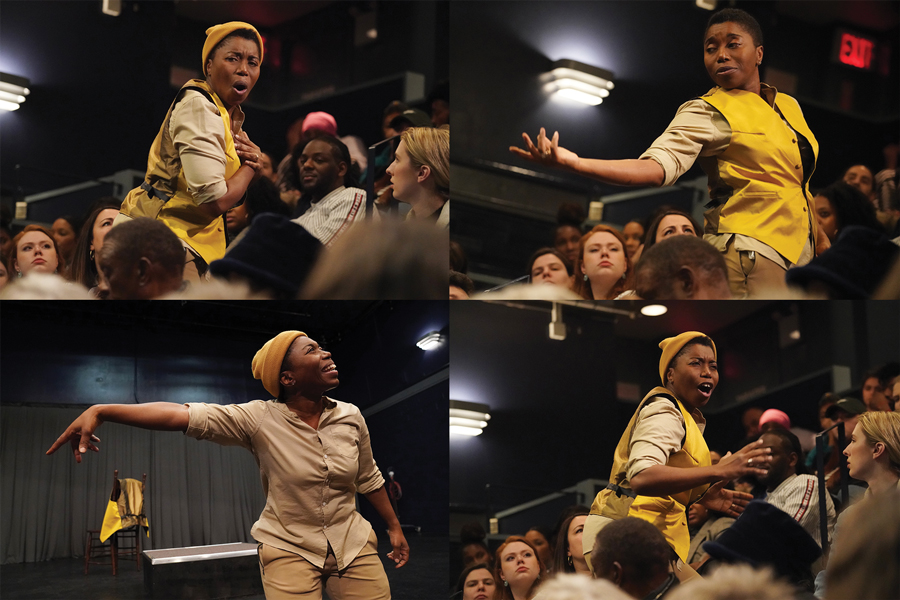 Donnetta Lavinia Grays performs in the co-world premiere of her play "Where We Stand" at WP Theater in New York City, directed by Tamilla Woodard. (Photos by Leslie Papa)

Back when she was at UCI, she recalls that she was the youngest person in all three years she attended.

“Coming from South Carolina, it was a culture shock being on the West Coast,” said Grays, who grew up in Columbia, S.C. “It was like growing up really quickly, and faking it ’til I made it with all of the older folks. I had to put on my big girl pants and get the training that I needed.”

Grays says some of her favorite instructors were Dudley Knight, a voice and speech professor who passed away in 2013; Annie Loui, who taught her movement; Leslie Ishii, who taught her “how to pursue a professional career as an actor, and what it meant to be in that space; and Clifford Faulkner, who taught her the history of theater.

“It was in this beautiful, inclusive and radical way, making sure we understood world theater,” Grays said about Faulkner’s instruction. “The way he taught expanded my mind in such a way as to make me consider the other forms of expression.”
Grays said she appreciates the freedom she had at UCI, but also the discipline she acquired.

“The School of the Arts stands out in a unique way from the rest of the campus,” she said. “We ran around in the fields there, doing acting exercises. We had our own oasis there of expression. We got to play, act, cry. … UCI also gave me the bones and the discipline of being able to do eight shows a week.”

The coronavirus pandemic has had a devastating effect on live theater and all of the performing arts. Grays, who was in the middle of a production of Where We Stand, was not immune from its impact.

“It’s been heavy and complicated and surreal,” she admitted. “We were able to get (Where We Stand) on film and have a virtual showing of that. I came immediately back to Brooklyn, where the theater community is so wonderful. If they see a need, they’ll try to pick you up. They asked, ‘Can you write this, for this program?’ They commissioned me to write a short play, a play at home. It’s short and intentionally joyful, for families.”

Then, after the deaths last year of George Floyd and Breonna Taylor at the hands of police, plus the protests and social unrest that followed, “that sort of switched my DNA,” she said.

We’re not brain surgeons, we don’t cure cancer. But we can help guide a soul, ease a soul, make a soul feel they’re not alone.

“It made me question what am I actually doing? How do I sort of help or challenge the narratives out there, or create conversation, or even help heal. I wrote a protest song, and had a number of different artists reproduce it. It just felt purposeful. I tell artists, ‘We’re not brain surgeons, we don’t cure cancer. But we can help guide a soul, ease a soul, make a soul feel they’re not alone.’”

Stephanie Ybarra, artistic director for Baltimore Center Stage, has worked closely with Grays, and calls her “the consummate storyteller.”

“Her ability to not only wield words on the page as a playwright but to also be able to manifest and activate words as an actor … it is this combination alongside her tremendous heart and humor that has me all-in on Donnetta L. Grays,” Ybarra said. “We should all be so lucky to encounter her work, and the way her career is going we all will very, very soon.”

Tamilla Woodward is the artistic director of Working Theater in New York City. She directed the premiere of Where We Stand and collaborated with Grays on its production.

“Donnetta is a true storyteller,” Woodward, who was recently appointed chair of the acting department at the Yale School of Drama. “She understands that the most powerful manifestation of story occurs when the imaginations of the teller and the listener co-mingle. Her characters’ words invoke worlds that grow inside the listener and become not only vivid but familiar — like the chorus of a great song, she makes you believe that you know this place or this human already, that you’ve been there before, or that you belong here now.”

As the pandemic eases and things slowly return to “normal,” Grays is looking forward to having productions of Where We Stand performed in Portland and at Steppenwolf in Chicago. She said the play changes “from performer to performer, from theater to theater.”

“If you think about the arts and theaters and cultural institutions, they should be places where people gather, where these ideas, where community can flourish,” she said. “What I’m interested in seeing in Black narrative is our radical joy, devoid of white gaze. We should fill our coffers with joyfulness, with Black ease, celebration, love, complications, failure, and bouncing back from failures.”

To learn more about Donnetta Lavinia Grays, visit her website at www.donnettagrays.com