In the few short months since graduating, Morgan Embry, M.F.A. ’19, has criss-crossed the country as a lighting designer for live music concerts. When she has time to spend in one place, it’s usually Los Angeles, where she’s busy showcasing her immersive art installations and — alongside a team that included other UCI graduates — winning the grand prize at the first Los Angeles Immersive Invitational.

Embry discovered and honed her talent as a lighting designer while earning her master’s degree at UCI, where she worked almost constantly in the state-of-the-art Experimental Media Performance Lab (xMPL) in the Contemporary Arts Center.
“UCI gave me confidence to pursue what I wanted to do,” Embry says. “It was the nature and design of xMPL, and the sheer amount of technology available, that allowed me to create live immersive experiences, which I realized I really had a knack for.”

Built in the style of a black box theater, with very flexible seating and performance areas, the xMPL offers high bandwidth internet connections, a dozen video projectors, non-traditional projection surfaces, and an overhead wire-tension grid that enables projectors, lights and speakers to be arranged in almost any way imaginable. According to Embry, ideas are only shot down in the xMPL if they violate the fire code.

“We’re exploring new approaches to artmaking that focus on advanced 21st century technology,” explains John Crawford, Claire Trevor School of the Arts (CTSA) professor and associate dean.  As the director of the Institute for 21st Century Creativity (21C), Crawford encourages faculty and students to use the xMPL for research and creative projects in emergent media, socially engaged artmaking and connected design.

Embry’s experience is a shining example of the creativity fostered by 21C and the xMPL. After studying dance and choreography at the University of  Alabama, Embry chose UCI for her graduate studies so that she could work with dancers and choreographers in its acclaimed dance program, and explore emergent media and design. “The program seemed both interdisciplinary and experimental, and that was really attractive to me,” says Embry. “I wanted a program that would let me explore, and UCI is definitely that place.”

During her three years at UCI, Embry handled the lighting for theatrical shows, dance performances, and even a film in the xMPL — in addition to producing a dance show and creating her own immersive art installation in the space. In February 2019, Embry brought her creativity to lighting Your Ocean, My Ocean, directed by Crawford, which used experimental dance, music, media and visual art to show how humans affect marine ecosystems. “We’re trying to bring the audience into the process of making exploratory work that can point the way to things we might do next,” explains Crawford, who points out that the very name xMPL sounds like “example” when spoken. “Your Ocean, My Ocean is a recent example of that.”

UCI, through 21C and CTSA’s new Emergent Media and Design Initiative, partnered with Brown University and the Rhode Island School of Design to restage Your Ocean, My Ocean as a finished product at Brown. Embry was among the 75 students and 15 faculty from the three campuses who worked together to put on the show. More faculty and student exchanges are planned through the collaboration, to foster new transdisciplinary projects.

In Embry’s final year at UCI, she created an immersive installation titled Ocean of Influence inside the xMPL, thanks to funding from a cross-disciplinary campus initiative, UCI Oceans. Embry collaborated with other UCI artists including sound designer Jordan Tani, M.F.A. ’18, as well as biology students from the University of California, San Diego, to incorporate science into the project. Oceanscapes projected on floating plastic sheets gave visitors the sensation of being under the sea, while an iPad allowed them to manipulate the conditions of the virtual ocean environment to see how human influences affected the health of the ocean. The artwork was later reinstalled in downtown Los Angeles during a live, multimedia concert experience. 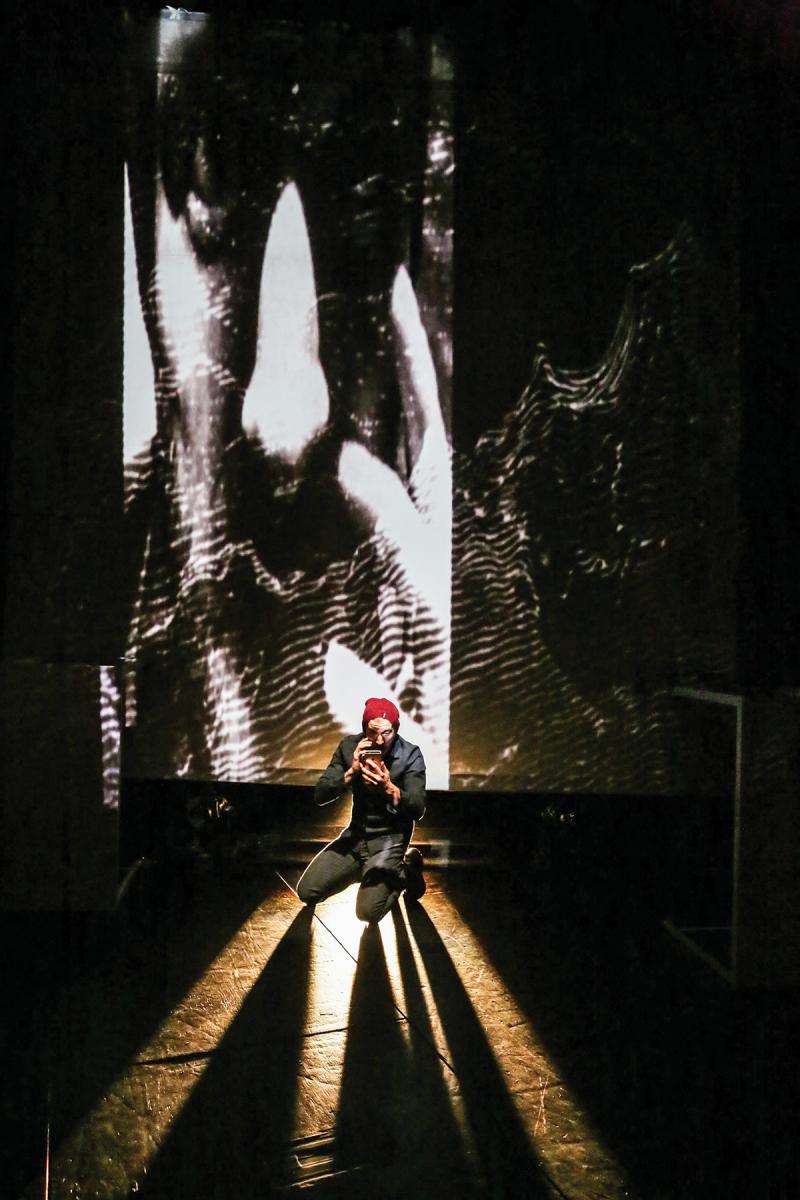 “It’s essential for our students and faculty to work with new technologies in a hands-on way every day to help us learn how to shape the technology for more positive benefits for humanity, which circles back to this issue of socially engaged artmaking,” says Crawford. “We want to do more than entertain people or create beauty – we want to do that in the service of relevant changes we want to see in society.”

Stephen Barker, dean of the Claire Trevor School of the Arts, hopes to soon offer even more curricula in emergent media and design, including creating courses that would prepare students to bring artistry and elevated storytelling to increasingly popular technology such as augmented and virtual reality (AR/VR) projects.
“Our interdisciplinary art initiatives, with an emphasis on new technology and emergent media, position the Claire Trevor School of the Arts as a leader in creative arts and culture, bolstering UCI as a model of the 21st century university,” says Barker.

As for Embry, she’s deeply grateful to have been able to break into the music industry, while also being able to continue pursuing experimental and transdisciplinary art. After finishing her three years at UCI and successfully launching her career, her advice to other students is to “hustle and network,” while taking full advantage of the resources available through xMPL and 21C.

“I wouldn’t be where I am now without going through the UCI program,” Embry says. “UCI gave me the skills I needed to have these opportunities now.”