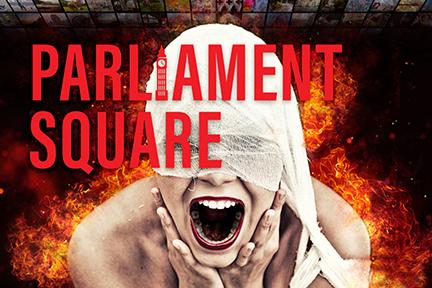 Parliament Square examines one young woman’s commitment to carry out an act of protest despite the cost of this decision to herself and her family in the hope of making a difference. As is true so often in life, the plans do not go off as expected. The remainder of the play examines the revisionist historical telling of her life’s events, and the “cost” this fabrication extracts from her and the lives of those around her. This hard-hitting and poignant play asks whether political protest can ever effect change and unflinchingly asks: what are we willing to sacrifice for our beliefs?

Professor Jane Page, head of the UCI Drama directing program, is at the helm. “I was profoundly moved when I saw this play in England in December of 2017,” said Page. “In the early 70s in Kansas, I had known two people who traveled to India to study yoga; during the first few months there they chose to immolate themselves in protest of the imprisonment of our guru.” As Page points out in her notes for the performance program, the use of self-immolation as an act of protest has a long history including being widely used in the 1960s in protest of the Viet Nam War and even as recently in 2014 with Reverend Charles Moore protesting racism. Page sets out to answer the question “what would I do?” if or when, am I truly moved to make a statement, make a difference, and demand change. “What can I do to make a difference?”

We are also thrilled to announce that British playwright James Fritz will join the creative team in Irvine to participate in conversations with the audience at post-performances TalkBacks beginning on March 13.

Parliament Square is the fourth installment in UCI Drama’s 2018-19 season, entitled “Against All Odds,” which explores stories of individuals and communities who have faced significant adversity, yet persevered. For more information about the season and shows, visit the department website: drama.arts.uci.edu/on-stage.

The UCI Drama production team will host a dedicated post-performance TalkBack on March 10 after the 2 p.m. matinee with the creative team and cast. There will also be casual TalkBacks with James Fritz after the performances from March 13 – 17.

About UCI Claire Trevor School of the Arts: As UCI’s creative laboratory, the Claire Trevor School of the Arts explores and presents the arts as the essence of human experience and expression, through art forms ranging from the most traditional to the radically new. The international faculty works across a wide variety of disciplines, partnering with others across the campus.  National-ranked programs in art, dance, drama, and music begin with training but end in original invention. Students come to UCI to learn to be citizen-artists, to sharpen their skills and talents, and to become the molders and leaders of world culture. For more information, visit www.arts.uci.edu.

About the University of California, Irvine: Founded in 1965, UCI is the youngest member of the prestigious Association of American Universities. The campus has produced three Nobel laureates and is known for its academic achievement, premier research, innovation and anteater mascot. Led by Chancellor Howard Gillman, UCI has more than 30,000 students and offers 192 degree programs. It’s located in one of the world’s safest and most economically vibrant communities and is Orange County’s second-largest employer, contributing $5 billion annually to the local economy. For more on UCI, visit www.uci.edu.

Media access: Radio programs/stations may, for a fee, use an on-campus ISDN line to interview UCI faculty and experts, subject to availability and university approval. For more UCI news, visit news.uci.edu. Additional resources for journalists may be found at communications.uci.edu/for-journalists.