Professor Zachary Price is fascinated with various modes of performance, from the proscenium stage to the street corner.

He’s a new faculty member at UC Irvine, teaching in the Department of Drama. He started his position as assistant professor of doctoral studies in July.

“But I’m also interested in 18th and 19th century Japanese theater — how that translates into more contemporary forms of Japanese theater.” He added that he’s also exploring connections between Asian, Asian American and Black cultures and performance in a new book project that he hopes will be published by the end of 2021.

Before UCI, Price was a tenure-track assistant professor in the Department of Performance Studies at Texas A&M University in College Station. He also taught in the Department of African American Studies at UCLA, where he was a president’s postdoctoral fellow and an assistant researcher in the Bunche Center for African American Studies, where he co-authored the first Hollywood Diversity Report.

He got his Ph.D. in theater studies from UC Santa Barbara, an M.F.A. in drama from the New School in New York City, and his bachelor’s degree in performance studies from Northwestern University. He has also acted in, directed and produced a number of stage performances.

Price grew up in Cleveland, Ohio. It was in Cleveland where he discovered the Japanese martial art aikido, which he still practices and uses as a vehicle for his scholarship.

According to his website, zacharyfprice.com, his research examines the relationships between performance, race, gender and power and the epistemological frameworks that such relations produce. Price’s scholarly work has been published in TDR: The Drama Review, The National Review of Black Politics, Theatre Topics, Journal of Asian American Studies and The Postcolonialist.

As a professor of doctoral studies at UCI, he’s a member of the faculty responsible for teaching graduate students how to conduct research and how to become scholars. He will be instructing and helping doctoral students in winter quarter 2021.
In the spring, he will teach African American theater and film to undergraduates.

Price is a recent transplant to Irvine, after spending several years in the greater Houston area with his family. (He has a son and a daughter, age 13 and 11, respectively.) For him, it’s a welcome return to the University of California system, where he got his doctorate and has taught before.

Yet, moving and transitioning to a new city and university in the middle of a global pandemic has also involved its own set of challenges.

“I’m in a different point in my life and my journey, both personally and professionally,” said Price, who turned 45 on Nov. 6. “The pandemic itself, also just very uncertain political times that we’re living in. As a person of color and a Black person, you think through your moves two, three, four times in advance. That’s just been a lot of stress, to say the least.

“The transition has been relatively smooth. But that required a lot of preparation, planning and mental labor. We’ve been calculating how to do things. We’re building the airplane as we go along.”

Price says his interaction with students so far “has been somewhat limited by the pandemic itself.”

“There’s a certain level of alienation and isolation — not only due to the virus, but to the inability to manage this health crisis,” he said. “The tools and the instruments we have are interesting, but as we all know they’re very limited. Zoom was always intended as a communication device. But it quickly got adapted and turned into a pedagogical one. We now have Zoombombing, and Zoom fatigue itself. I’ve seen my own kids struggle with that.

“It’s an unprecedented situation. We’ve all had to become online teachers. We’ve quickly learned, and it can look like an absolute mess, in my opinion. But there are some generative things — you can be accessible to your students, regardless of physical proximity. It does depend on you having access to a secure, steady internet connection. Many students and even some professors don’t have that.”

“What distinguishes Zachary Price is his passion to find in performance studies tools for the liberation of oppressed and marginalized peoples...”

Price is still fascinated with performance as “one of the predominant methods through which we not only construct our society, but also shape and make the power relations within the broader political sphere.”

He cites the late poet Amiri Baraka, co-founder of the Black Arts Movement; Luis Valdez, founder of El Teatro Campesino; Funmilola Fagbamilia, playwright and adjunct professor at Cal State L.A.; and Shamell Bell, a lecturer at Dartmouth College, as inspirations who have used performance practices to organize and mobilize people of color.

“What distinguishes Zachary Price is his passion to find in performance studies tools for the liberation of oppressed and marginalized peoples — which means all of us —the world over,” said Jeffrey Stewart, professor of Black studies at UC Santa Barbara, who worked with Price when he was a doctoral student there. “A close student of plays and less-structured improvised performances, Zachary brings a sharp acumen for how performance opens our eyes to unrealized, unexplored dimensions of our everyday lives.”

Price’s current research project is called “Black Dragon,” which he describes as “an intertextual analysis of an intersectional project — Afro Asian performance across a series of platforms, including but not limited to film, theater and new media, bringing to bear of some familiar works of art with a focus on Black masculinity.”

He says the cover art for the book is anticipated to be a scene from the 1978 martial arts film “Game of Death,” where Bruce Lee is sparring with former Laker great Kareem Abdul-Jabbar. His publisher will be Ohio State University Press.

A venture Price still holds near and dear to his heart is The Odyssey Project, created at UC Santa Barbara during the summer of 2011. The project is actually a course that partners undergraduate and graduate students at UCSB with incarcerated youth at Los Prietos Boys Camp. The youths, age 13-18 and considered “wards of the court,” learn acting, writing, spoken-word exercises, choreography and martial arts, using Homer’s epic poem “The Odyssey” as their source material.

Price continues to serve as a teacher, researcher and consultant to the project. “It is … intended to be an offering for those educators, activists, policy makers and cultural workers who take seriously the possibilities of using art for social justice,” he said. It also aims to provide a marginalized and non-university community access to university resources.

So even though he’s still pretty new to UCI, what’s on Price’s wish list for the university?

“One of the things that I would like to see happen is the development of a Black arts and Black publics platform here at UCI that creates a dynamic space for performance-based research and creative practice — that is also in conversation with many artists and arts scholars throughout the country who are asking the same kinds of questions and doing a similar kind of work,” he said.

“Engaging these kind of abolitionist approaches to pedagogy takes a lot of energy, and one of the challenges is confronting the limitations due to COVID-19. I am thinking about the necessity to engage in long-term study for long-term struggle and that necessitates a willingness to stay disciplined while simultaneously being able to reconceptualize as the facts on the ground shift and change in unexpected ways.” 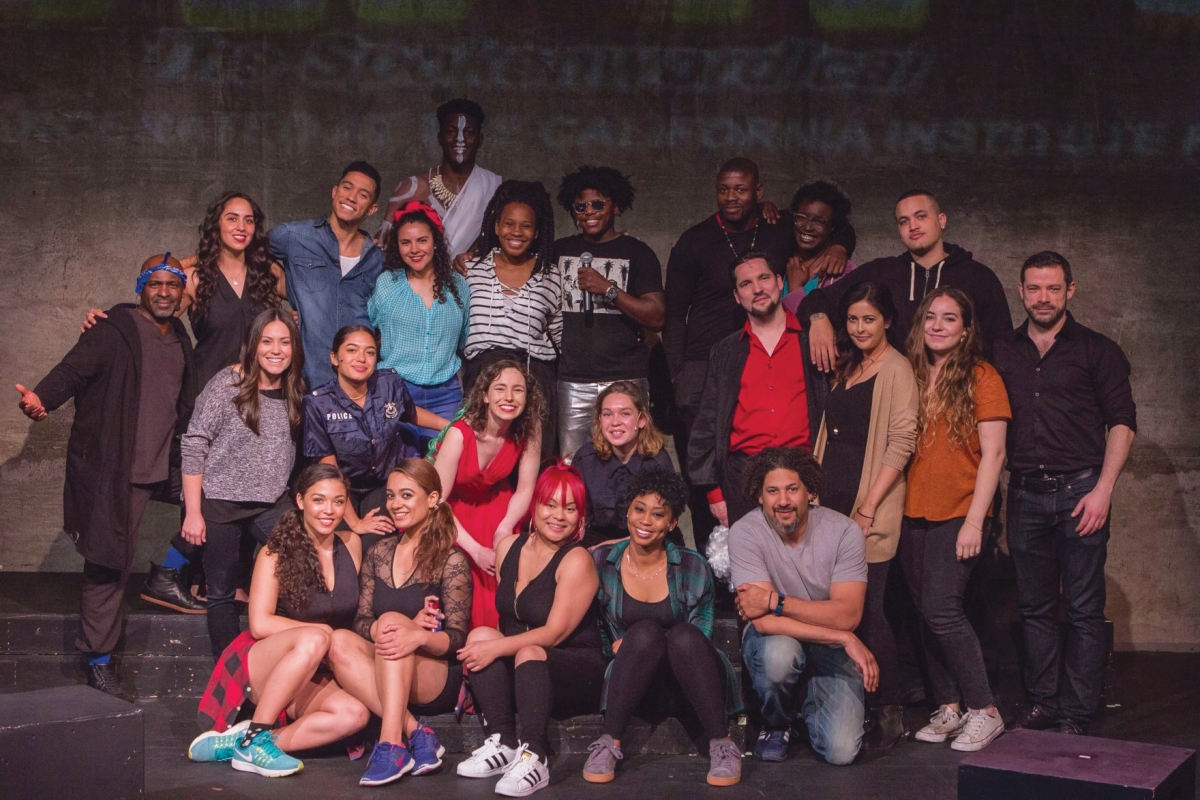 Image: Zachary Price (bottom right) with the artistic team from “What It Iz,” a play by Bryonn Bain (far left). Price co-directed and choreographed the martial arts for the UCLA production, which ran at The Los Angeles Theatre Center in 2017.

To learn more about Zachary Price and the faculty in the Department of Drama, visit drama.arts.uci.edu.