For Tiffany Ana López, joining the Claire Trevor School of the Arts as dean is a double homecoming. Both a return to her native California and to the public higher-education system that shaped her. She is an alumna of all three California higher education systems — community college, Cal State and University of California — and previously served as UC faculty for two decades.

This is also a moment of perfect alignment for López. She is both a scholar and an artist who, like school namesake Claire Trevor, distinguished herself in drama. And just like more than half of UCI undergraduates, López was the first in her family to attend college.

From her office overlooking Mesa Road, just across the bridge from the main arts campus, López soaks in her new reality, and considers the school’s future.

“I feel such a sense of connection with the students of UCI, the faculty, the community of Orange County and the larger mission of the Claire Trevor School of the Arts,” says López. “My entire 30-year career has led me to be exactly here at this moment to do this particular work that I’m passionate about.”

López credits arts with enabling her to transform her own life when she was just a teen. Raised by a Mexican-American father who was the youngest of eight born to his migrant farm worker parents and a mother whose impoverished family roots span from Oklahoma to Lancaster, Calif., López left her violent and abusive home at age 15, moving in with a friend’s family.

Through community arts programs in Santa Barbara in the 1970s, López wrote stories at the library, made ceramics in the park, and gained the capacity to envision a better future.

“Those early experiences with arts planted little seeds that gave me the power of imagination,” López says. “Even as a child, I was able to imagine that my years growing up were just a moment in time — not the be-all and end-all of my life.”

Several teachers also envisioned more for López’s future, pleading with her to finish high school, even though by then she was working full time at a fast food restaurant. After advancing to a management position, López set her sights on someday owning a franchise. A supervisor told her she would need at least some community college, so López enrolled at the local Cosumnes River Community College in Sacramento. Higher education would set her life on a completely different path.

“The gifts of my education completely transformed my being, my life,” López says.

The gifts of my education completely transformed my being, my life.

Faculty took an interest in López and encouraged her to transfer to California State University, Sacramento. There, poet and English professor Olivia Castellano singled out López as a future writer and academic.

“Mija, I have to know that when I die there will be at least one other Chicana English professor in this world,” Castellano told López. “It has to be you.”

To López, this was an anointing. Castellano brought López into Sacramento’s thriving Chicano arts scene, introducing her to novelist Rudolfo Anaya (best known for Bless Me, Ultima), poet and artist José Montoya, and up-and-coming author Sandra Cisneros. She started reading American classics, such as John Steinbeck, and Chicano literature about the lives of migrant farmworkers, like her grandparents, and slowly her past began to make sense.

“As I learned about my cultural history, all the pieces began to fall into place,” says López. “My parents had been passing forward a legacy of trauma – the immigration story and the violence of poverty that was part of their history.”

Those seeds of imagination, planted as a small child and nurtured in college, began to blossom as she pursued graduate-level research into how Latina dramatists stage conversations about violence and trauma, as part of an effort to confront their experiences and change them for future generations.

“My interest was in Latina drama as a living form of literature. How community storytellers were engaging questions that writers and philosophers had been exploring for centuries and that they were using theater to personally and socially transform people,” she says. 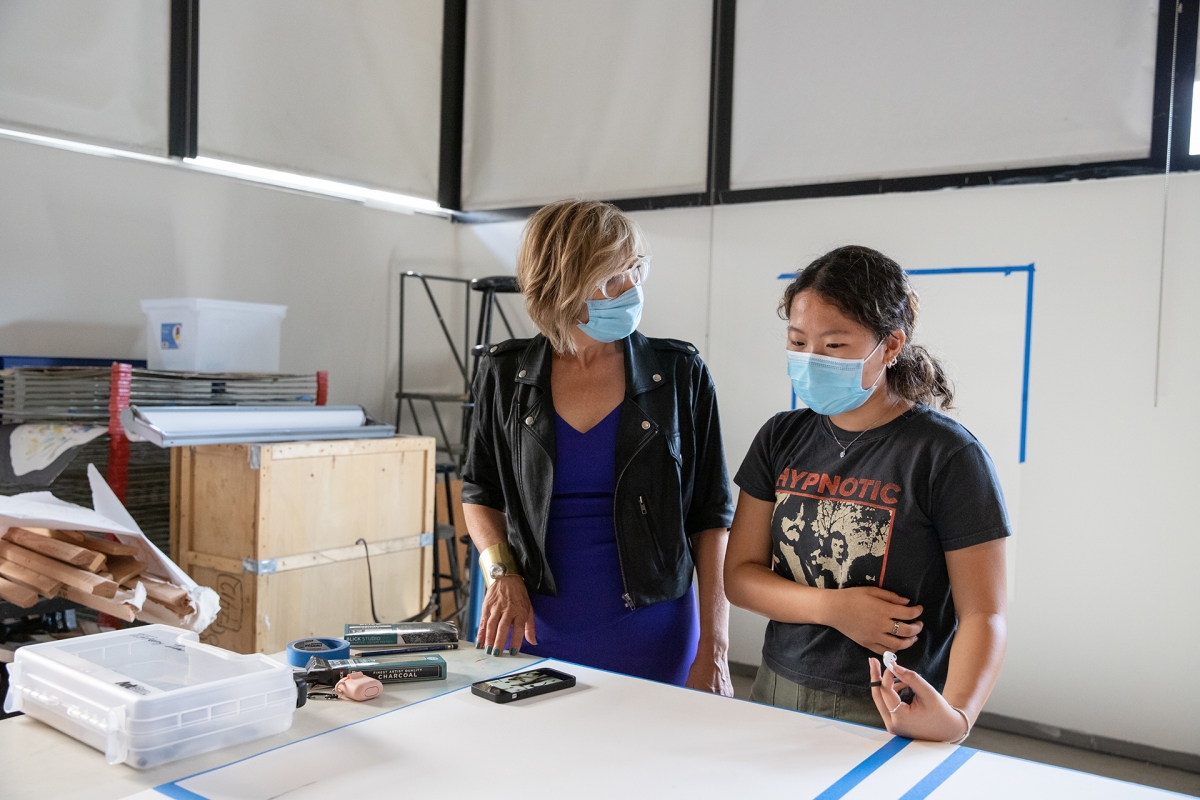 Image: Dean López spends time with a high school student artist in the 2022 Summer Academies in the Arts drawing and painting class.

In 1995, López became the first Latina English professor hired by UC Riverside, and in 1997, she and a classmate became the first Chicanas to earn their doctorates in English from UC Santa Barbara.

As a faculty member, López focused on building pathways for students, an increasing number of whom were from Latino families. She built introductory composition classes around Chicano literature and developed courses in Chicano children’s literature and the literature of social change.

“At a time when UCR was rapidly becoming a Hispanic-serving Institution, it was inspiring to be working to serve not only our students but our state.”

Simultaneously, López’s own artistic life flourished. She worked with dramatists, playwrights and theater companies to help steward storytellers through their process. She served as dramaturg for productions across the West Coast, including at Oregon Shakespeare Festival, Center Theatre Group, Latino Theater Alliance, as well as the Orange County-based South Coast Repertory Theatre and Breath of Fire Latina Theater Ensemble.

Eventually, her heavy involvement in arts led her to transfer to the Department of Theatre, Film and Digital Production at UCR, where she became the Tomas Rivera Endowed Chair. In that role, López continued building bridges of understanding, such as presenting a student playwright’s production about a trilingual family in English, Spanish and American Sign Language. She also collaborated with filmmakers in Los Angeles, helping students develop their digital and cinematic storytelling.

In 2016, López left California to lead Arizona State University’s film, dance and theater school. During this pivotal time, she worked with the school’s faculty, industry partners and the family of Sidney Poitier – the first African American to win the Academy Award for Best Actor — to launch the Sidney Poitier New American Film School, with a focus on elevating the next generation of filmmakers, with voices as diverse as the American experience.

You can see the richness of being around innovation, excellence, diversity.

She also diversified faculty across the school, increased opportunities for students to engage with regional artists, and offered mentorship to students. With the film school established, López went on to spearhead ASU’s office of inclusive excellence as vice provost — right when schools were closed due to the pandemic and Black Lives Matter protests were bubbling across the country.

“It was amazing work, thinking about how to build what’s needed for the current moment,” López says.

But López missed California, and her administrative, scholarly and artistic experiences aligned perfectly with UCI’s call to fill retiring CTSA dean Stephen Barker’s position. It was time for Lopez to return home to the UC. 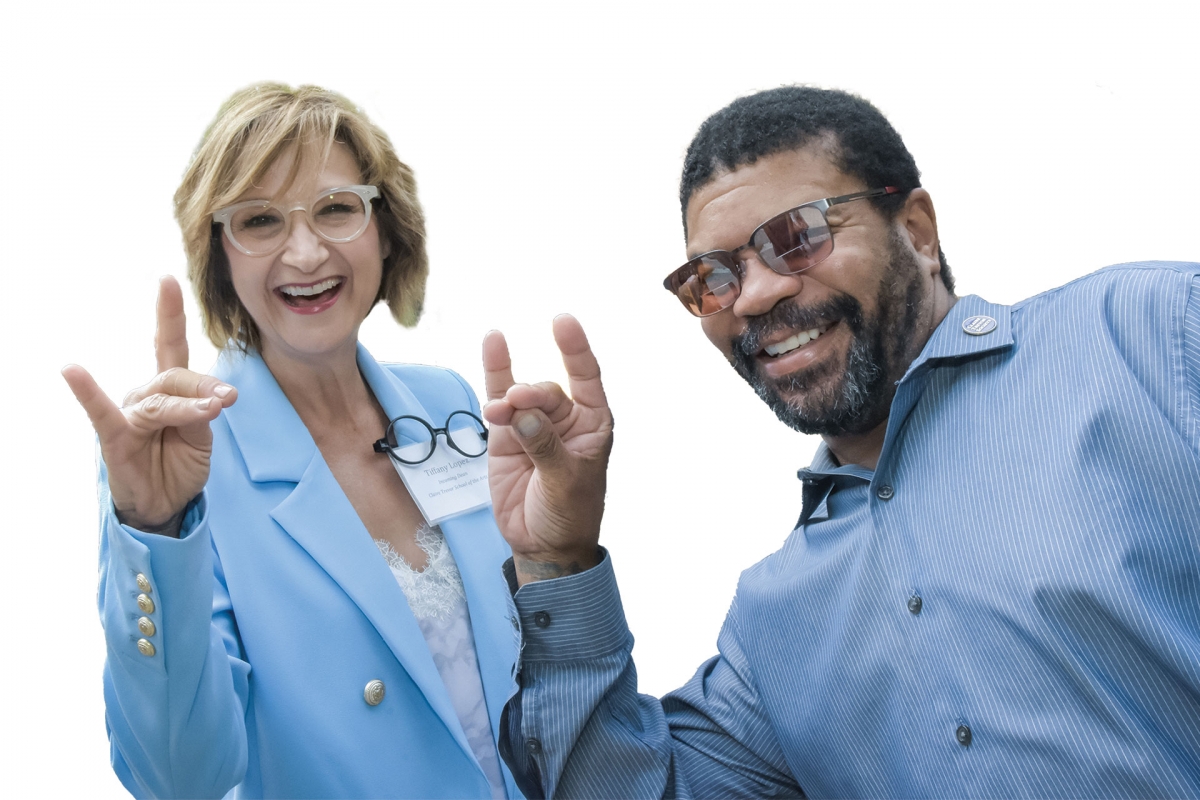 Serving as a Steward

On her left hand, López wears a distinctive ring made of mixed metals, in the shape of a pipe that spans three knuckles. It’s a conduit, she explains, that she wears as a reminder of her sense of purpose to serve in academic leadership. It was created by an Arizona-based artist who, like López, made a mid career shift – from architect to jewelry designer.

Since moving to Irvine in July, López has been meeting with faculty, staff, students and community members to understand their needs and desires and begin to create the future with them.

Institutions like universities evolve gradually. López slowly and deliberately moves a glass of water across the coffee table in her office, a metaphor for how a structured system like a university advances. But, she points out, the water inside the cup could flow much faster in the direction it’s going if it were poured out of its rigid container.

López sees higher education nationally at an inflection point and that universities and arts institutions will have to evolve to meet the demands of the future.

“The invitation, nationally, is how do we preserve what’s crucial and excellent in how we deliver education while innovating to make it more agile and adaptive to today’s learners?” she says.

Community connections will be an essential part of her vision for the school, with mutual benefits.

“One of the catalysts of my childhood in California was the free and ample public arts programs,” she says. “Students share with the community what they are studying as well as take what they were experiencing in the community back into the university.”

On a recent visit to high school students in the Summer Academies, who are taught by UCI arts students, López says she was reminded of the impact of those interactions – such as a jazz musician sharing the power of improvisation with classically trained chorale students.

“You can see the richness of being around innovation, excellence, diversity,” she says.

CTSA students have told López they want faculty and alumni who will help open doors on their career paths, and they want to feel safe bringing their whole, authentic selves into the classroom and studio. Both of these desires resonate with López and her own experience as a first-generation student.

“I think about the gifts of my education and how education completely transformed my being, my life,” she says. “My goal is for our students to step into that legacy and see that they, too, will be transformed and can become leaders and stewards for the next generation.”

López hopes to further strengthen the school’s connections with alumni working in Los Angeles, New York City, and all around the world – as a resource for current and future students forging career pathways, and as a community of lifelong learners tied to CTSA.

“It would be incredible for our students to feel they are part of our alumni network from the time they come into the school, not just after they graduate,” she says.

With the start of fall quarter just around the corner, López will soon be welcoming returning and new Anteaters back to campus.

“UCI proudly produces critical and agile thinkers, and the university recognizes that every student must have a connection to the arts, because the arts are a major driver of creativity and innovation,” she says. “It’s wonderful to be here helping foster new generations of creatives, makers and researchers.” 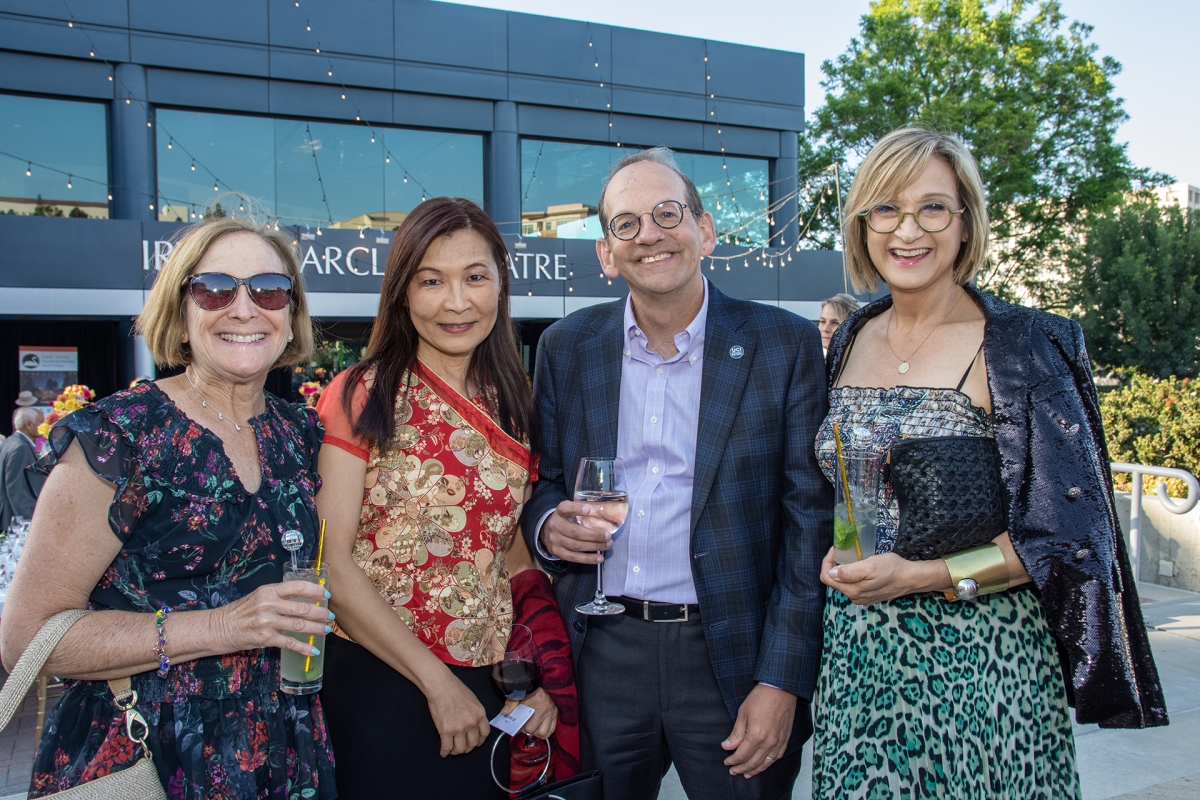