Reynolds’ research spans several disciplines, including critical theory, history, performance studies, social semiotics, philosophy, cognitive neuroscience, dramatic literature, and African and Middle Eastern studies. It focuses on the experience, articulation, and performance of consciousness, subjectivity, affects, and sociocultural formations, particularly the ideologies, politics, passions, and geographies that define them, both on and off the stage.

Books in progress include: as co-author, with Mark LeVine, Art Beyond the Edge: Creativity and Conflict in the Middle East, Africa, and South Asia (forthcoming from UC Press); as author, Toward a Performance Philosophy of Extreme Sports from Skiing to Motocross: Reimagining Worlds; as co-editor, with Mark LeVine, Theater of Immediacy: Social Change and Revolutionary Performance in the Middle East and Africa.

Reynolds is also a playwright, director, performer, and cofounder and Artistic Director of the Amsterdam-based Transversal Theater Company, which has produced a number of his plays in the United States, Europe, the Middle East, Asia, and Africa, including: Unbuckled; Woof, Daddy; Railroad; Blue Shade; Lumping in Fargo; Eve's Rapture; The Green Knight; Nabi Saleh; Fractalicious!; No Erasure; Curie, Curie;  Interview the Dead; After Images, or Marie Curie Remembers. Some of his plays can be found on Academia.edu 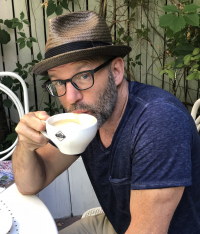